Our vision for everlasting peace in the Middle East through economic cooperation has spread from coast to coast and around the world. Our artificial islands project was recently featured on page 30 of the latest issue of Georgia Engineer magazine, a specialty publication distributed to thousands of engineering professionals.

The article enthusiastically covered all aspects of the Menorah Islands Project, from its humble origins as one man’s idea for lasting regional peace, to the advanced technological endeavors that could be utilized on the islands, and everything in between. The project visionary, his advisors and professionals all contributed their expertise to the Menorah Islands Georgia Engineer article.

Drawing inspiration from a reference to islands in the biblical book of Isaiah, Aoun contacted Kamen regarding his specific vision of the artificial islands. Modeled after New York City’s diversity, Kamen’s interpretation of Aoun’s vision incorporates a wide range of scientific advancements that are in development throughout the world.

“I was given a symbol, and architects love metaphors” Kamen said.

That symbol was the menorah, the candelabra often associated with the Jewish holiday of Hanukkah and the biblical ritual object from ancient Israel. The end result is the vivid imagining of seven circular islands, two submergible islands, and connecting causeways to each that sprawl out to create the menorah from an aerial view. 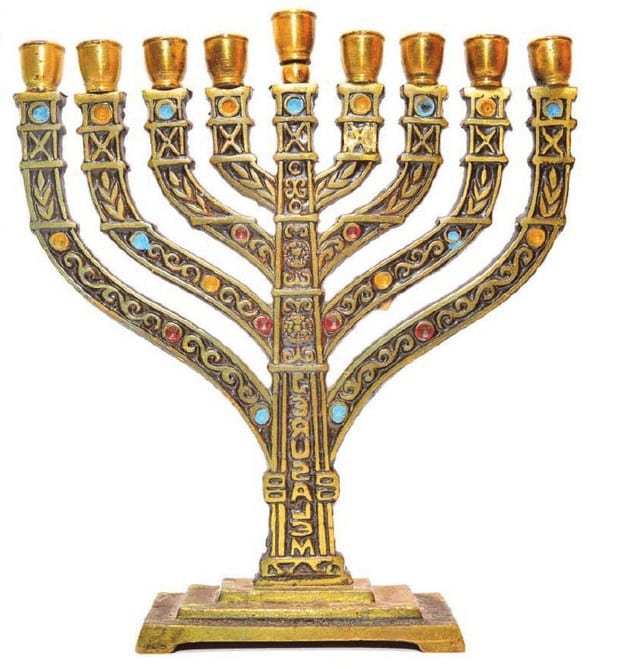 “My work … poses a question to other experts on how this could be done,” Kamen said. “My job was to limit the scope and make the concept available for other people to weigh in,

[to consult] experts who know… how to go about making this happen.”

Aoun’s vision — and Kamen’s interpretation of that vision — is not only an architectural marvel. The complex would feature a wide array of technologies that would preserve and sustain the earth’s resources, instead of rampantly going through them.

“The whole idea of sustainable architecture is not a new idea,” Kamen said. “It’s as ancient as the cultures of the Middle East. There has been wind, water, and solar use for thousands of years, but we are using all our new technologies now. [Harnessing the power] was the technology in the villages over time, so using these resources hearkens to and reaches into the past.”

Some of the most pressing global needs are addressed through the most impressive technological advances. The most important addresses the worldwide need for potable drinking water. The Menorah Islands Project wishes to incorporate atmospheric water generators throughout the artificial island complex. Other technologies involve filtration systems to address polluted air and urban farming techniques to address hunger.

“The aim was to incorporate zero-waste and low-energy technologies into the task of food production,” Kamen told the magazine. “I have the places for it (in his sketches), but this is almost a call to these experts in these areas of study- how could this be done? As an architect, I don’t know, but this is where it should go for the optimized placement and usage.”

A particularly unique highlight of the complex are the two outermost submersible islands that can be raised in and out of the water.

“In my thinking, the islands would use the same technology as submarines,” Kamen said. “Semi-submersible ships used for offshore drilling already exist. This technology is something that is already out there.”

The Georgia Engineer publication also discussed the origins of the project and its overall goal to pursue peace in the Middle East through economic cooperation.

Joseph Aoun, the project’s founder, is a Bethlehem, West Bank, native and a convert to Judaism, After experiencing the conflict from both sides of the coin, he believes that Israelis and Palestinians need something that will bring them together to work for a common purpose- not just a reason to work together, but a place where politics don’t damage potentially successful relationships before they start.

“I am not a politician – I put politics on the side – I am looking at economic and moral factors,” Aoun said. “I believe if we build these islands with Israelis and Arabs cooperating with each other, together we can improve quality of life in the Middle East.”