Water conservationists are taking notice of the Menorah Islands Project

Water conservationists are taking notice of the Menorah Islands Project

There is a lot of water in the air…

The minds behind the Menorah Islands Project’s artificial island complex understand the crucial problems linked to water shortage in the Middle East. As a result, no solution for peace in the region could be complete without addressing the basic human need for water. Two technologically feasible methods we plan to incorporate, atmospheric water generation and desalination, recently caught the attention of the American Water Works Association (AWWA), who noted our project in their most recent publication!

“The goal of the Menorah [Islands] project is to be the greenest artificial island project ever attempted by using solar power and other environmentally-friendly power-generating methods,” the article reads. “The concept could also incorporate technologies such as passive systems in place of heating and air conditioning, wind and solar power, and electric car-charging stations to encourage gas-free travel.”

AWWA is the largest nonprofit, scientific, and educational association dedicated to water treatment and management. The group, which has been active for more than 130 years, offers education to and advocates for safe and sustainable water on behalf of its 50,000 members.

“When combined, these techniques could create enough drinking water to export back to the mainland and serve to relieve the stress on the Middle East’s water supplies,” the article reads. 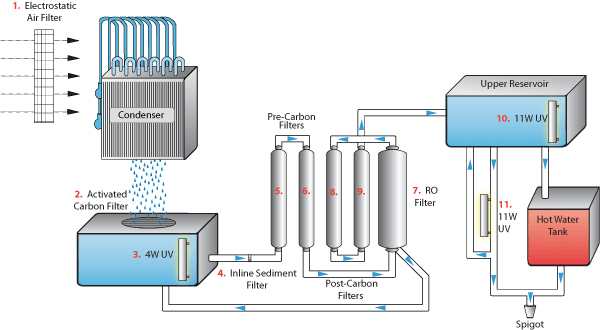 This diagram demonstrates how one type of atmospheric water generator would function.

“The technique has been hailed as an increasingly important solution to provide clean drinking water and address water shortages,” the article says. “Atmospheric water generators are currently capable of generating several thousand gallons per day. The proposed project calls for the use of solar-powered atmospheric water generators to create an additional source of water for the arid region… The Menorah Islands Project believes that a significant portion of the complex’s water could be generated this way.”

The article notes that atmospheric water generators have “been discussed in relation to several large cities throughout the world that are facing water shortage issues.”

The AWWA article also mentioned the artificial island complex’s idea to build a solar-powered desalination plant at the trunk of the island complex.

“When combined, these techniques (atmospheric water generator and desalination) could create enough drinking water to export back to the mainland and serve to relieve the stress on the Middle East’s water supplies,” the article reads.

Similar water advocacy organizations have acknowledged the dire need for water in the Middle East. Arab Water World, a monthly publication that covers the latest developments and technologies related to water, wastewater, desalination, and energy, reported in a recent issue on desalination efforts in the Gaza Strip and Sinai Peninsula.

“Desalination as a source of water supply has many advantages and few disadvantages,” Arab Water World reported, citing a similar $1 billion plan to build desalination facilities in Egypt that would serve the Gaza Strip and Sinai Peninsula. “This proposal should improve agriculture, as well as the economy and industry of both areas, which leads to improving the economical, political, and environmental situation for both sides.”

It is clear that the time has come for the nations of the Middle East to put aside their differences and unite around addressing this major issue.

The Menorah Islands project’s water desalination and atmospheric water generation efforts could also assist in providing more water in the Middle East! Experts around the world are eyeing these projects as part of the stability of the future of the Middle East, and we are excited that our vision could be a part of such a harmonious future!